The 2019 California Jazz Arts Society Board of Directors and Officers

CalJAS Founder and President, Dale has loved music his entire life, and began singing solos in church at age four. He fell in love with jazz when he was hired to sing standards for a noted jazz/dance group in Saginaw, Michigan.  Dale continued as a professional musician until he accepted a full time high school teaching position in Southern California. Nearing retirement, Dale, with his wife, Sue, began presenting jazz concerts in 2004 and founded CalJAS in 2005. While he continues to perform occasionally,  his main efforts are centered around jazz education, and presenting and promoting jazz in intimate, interactive concerts.

Wife of CalJAS President, Dale, Sue recently retired after a 36 year career as a high school math teacher.  Sue’s math skills, as well as her penchant for record keeping and organization, served her well as treasurer of a large teachers’ association, and now as controller for the Friends of Jazz (jazz preservation society) and the current treasurer of CalJAS. 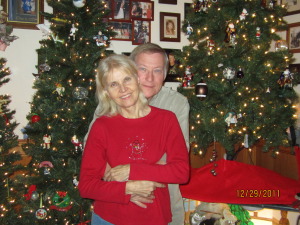 Although Dan had been a casual acquaintance since the 1970’s, we re-acquainted when he began attending CalJAS events in 2005.  Prior to his career as a high school art teacher, Dan worked for a number of years as a professional musician and sang professionally throughout Nevada, including Las Vegas, Southern California, and the West Coast as far north as Washington State.  After leaving “The Business,” to teach Art, Dan continued to play casuals in So. Calif. for several years.  Dan is now retired from both performing and teaching.  His knowledge of jazz history is impressive and has been an asset to CalJAS since becoming a Board Member in 2008.

Suzie has been a part of CalJAS since the very beginning and was an original founder when we filed for incorporation on January 5, 2005.  A retired high school art teacher, she spends much of her time as a tireless volunteer for charitable causes.  Suzie has always loved music and continues to sing in her church choir.

James discovered CalJAS in 2006 and immediately became a regular participant in our programs.  Employed by the LA School District, James has been a CalJAS Board Member since 2009. James not only loves jazz, but his music interests include vocal music, singing both in his church choir, and the Windsong Southland Chorale, of which he is currently the President.

Mike began attending CalJAS functions regularly in early 2006 and soon became one of our very best supporters and contributors.  Appointed to the Board of Directors each year since 2009, Mike continues to be a great ambassador for our organization.