Art exhibitions, whether thematically connected to American Jazz, presented in conjunction with jazz concerts, or as separate activities, are an additional goal for our organization in its efforts to promote and preserve jazz and other American art forms. Many of the Boatman/Summers Presents performances also featured art exhibits by prominent painters and photographers, as well as local and student showings.

Artists who wish to show their work at one of our events should contact us.

Other concerts, lectures, and performances of additional American art forms will be investigated and hopefully implemented by our organization. Examples of activities we would like to include are: The American Theater; The Great American Songbook; American Folk Music Yesterday and Today, American Stories or Storytellers, American Literature and Writers/Poets, American Comedy and Vaudeville, The American Magician, American Puppetry, American Film, American Music Performances or Performers of all types (which could include, but certainly not be limited to, everything from Choral, Barbershop, Classical and Chamber), and Dance . 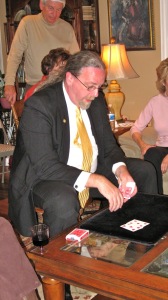 A major goal for CalJAS in 2014 will be to expand our efforts in these areas.