“A protégé of the late Ray Brown, Ms. Korb’s bass playing is the foundation of her musicianship. She is an increasingly clever lyricist in the songs she writes, arranges and sings.”  Doug Ramsey, Rifftides

There are few bassists who can sing and there are even fewer who can do it well.  Kristin Korb is one of those artists who make you forget that she is playing the bass when you hear her crystalline voice. Inspired by the days when music was romantic and made you want to dance, Kristin and her trio embody that spirit and carry their audiences along for the ride.

Korb is no stranger to the California coast having lived here for a number of years. She earned her masters degree in Classical Bass Performance at the University of California, San Diego and was lucky enough to have studied with the great bassist Ray Brown, with whom she made her recording debut, “Introducing Kristin Korb with the Ray Brown Trio” released in 1996. Love eventually brought the American bassist and vocalist to Denmark in 2011.

Korb now returns to California for a series of concerts to celebrate her 8th release, “Beyond the Moon”. Inspired by the storytelling of one of America’s greatest lyricists, Johnny Mercer, Kristin includes several of his biggest hits and then takes a voyage of discovery into unpublished texts that Mercer never made into songs.

Kristin has been a longtime friend of CalJAS and has been very supportive of our organization since its inception.

Andy Langham studied Jazz Perfomance at The University of North Texas. Since relocating to Los Angeles a number of years ago, he has toured with just about everyone from Natalie Cole to Christian McBride and the New York Voices. Currently Andy is a member of Poncho Sanchez’s Latin Jazz Band and can been seen touring all over the world with Poncho. When he’s not on the road, Langham can be found teaching Jazz Piano at California State University, Long Beach.

Andy is a repeat performer for CalJAS

Ryan is the go-to drummer in Wisconsin for all kinds of great musicians traveling through the state. After music school, the Montana native sought out some of the most influential musicians in the country to study drumming and jazz. Drum set great Jeff Hamilton and master Afro-Cuban musician Michael Spiro have been two of his greatest mentors and inspirations.

Ryan has spent extensive time studying music abroad in India and Cuba. Ryan now co-leads the Afro-Cuban drum trio, Africa->West. The trio plays original compositions based on traditional West African and Cuban music. In addition to their residency at the Baldwin Wallace Conservatory of Music in Cleveland, Ohio, the group has released 4 recordings.

As a sideman, Ryan has performed with Aretha Franklin, Frank Sinatra, Jr., Bill Mays, Russell Malone, Byron Stripling, John Fedchock, Llew Matthews, Tamir Hendelman, Valerie Naranjo (SNL orchestra), and Barry Olsen. In addition to drum set, Ryan has performed as percussionist on the touring Broadway productions of Wicked, Spamalot, and others. Ryan has played on numerous recordings and has been seen at many jazz festivals and venues internationally. He is also on faculty at Baldwin Wallace University, Lawrence University, and University of Wisconsin-Stevens Point.

Ryan also happens to be Kristin’s brother. They grew up playing music together when it was more of a competitive sport than a collaborative activity. They’ve both grown up over the years, but one can still see the sibling banter happening on the bandstand.

This will be Ryan’s first performance for CalJAS 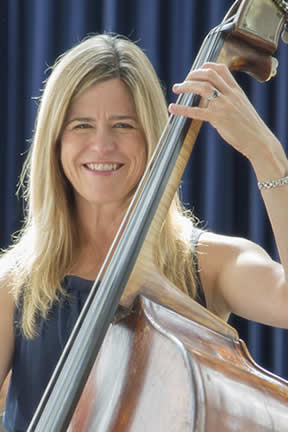